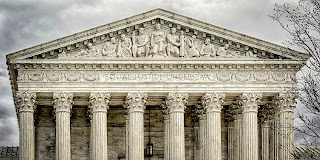 Well... right on the day I posted about the Court, look what happened!  Wow!
The biggest headlines went to the amazing 6-3 ruling that gays and lesbians are protected from discrimination under the 1964 Civil Rights Act AND, most astoundingly, trans people are likewise protected.  Way, way further than anyone expected.  The opinion was written by a Trump appointee to the bench and the Chief Justice, a conservative Catholic, concurred in the opinion.
Mr. Gorsuch grounded the opinion in a reading of the 1964 Civil Rights Act. The act’s Title VII bars employers from firing, discriminating against or failing to hire people based on race, color, religion, sex or national origin. “An employer who fires an individual for being homosexual or transgender fires that person for traits or actions it would not have questioned in members of a different sex,” Mr. Gorsuch reasoned. “Sex plays a necessary and undisguisable role in the decision, exactly what Title VII forbids.”“Those who adopted the Civil Rights Act might not have anticipated their work would lead to this particular result,” Mr. Gorsuch conceded. “Likely, they weren’t thinking about many of the Act’s consequences that have become apparent over the years, including its prohibition against discrimination on the basis of motherhood or its ban on the sexual harassment of male employees. But the limits of the drafters’ imagination supply no reason to ignore the law’s demands.”  (Washington Post)
But that was not the only thing that happened

The Supreme Court on Monday declined to take up California’s “sanctuary” law that forbids local law enforcement in most cases from cooperating with aggressive federal action to identify and deport undocumented immigrants. The court let stand the law passed after President Trump took office and challenged by his administration. The most significant measure limits police from sharing information unless the immigrants have been convicted of violent or serious crimes.

The Supreme Court on Monday declined to take up new cases for next term that gun rights groups claimed denied Second Amendment rights. The court did not accept a batch of nearly a dozen cases that gun groups had hoped the court, fortified with more conservative members, might consider. Among them were cases involving restrictions in Maryland and New Jersey to permits for carrying a handgun outside the home.