Kel's perspicacity (see her comment on previous post) has shown itself keenly astute once again. Rolling into August does bring on a season of doldrums. It's gotten humid, and they keep threatening close to triple-digit heat, though they've been mostly way off on that, due to highly unstable weather patterns coming in from the heartland. Likely the result of all the hail that silly Squirrel had to go and stir up in the Dakotas. Anywho, We've mainly just been laying about the Summer Palace, showing Ourselves to the public on the balcony every now and then to receive the adoring accolades of Our subjects. . . 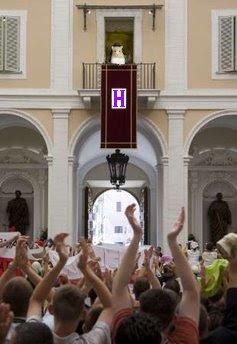 reading, doing some crosswords, figuring out whether Uruguay is worth conquering, watching the new season of "Project Runway." You know, the usual Imperial Hamster Summer stuff.
Posted by WickedHamster at Thursday, July 31, 2008 3 comments:

They're at it again! from DailyRecord.co.uk:
Penguin Picked Up After 999 Alert

RESCUERS hunting for the site of a plane crash at sea called off their search - after the casualties turned out to be two inflatable penguins.

Coastguard and lifeboat teams, along with a helicopter, were scrambled after an elderly man reported a light plane had ditched near Fraserburgh, Aberdeenshire. He was convinced he saw wreckage glinting in the sun. But rescuers discovered that what he had spotted were two massive balloons shaped like penguins.

Victor Sutherland, coxswain of Fraserburgh Lifeboat, said: "When we got there, all we found were the penguins. They were pretty large and could easily be seen from the shore. I can understand why he thought they were debris."

The man raised the alarm on Wednesday afternoon when a microlight he had been watching off the coast vanished from view. But the search was called off after the 4ft penguins, which were semiinflated, were discovered. The two penguins - whose source remains a mystery - have now been "adopted" by the lifeboat team.

Mr Sutherland says he does not want the false alarm to put people off calling the Coastguard. He said: "It would have been a costly exercise. But the man did the right thing."
Posted by WickedHamster at Friday, July 25, 2008 4 comments: Now that school is out and all, Kel and the girls can enjoy some mother-daughter bonding and maybe even go out on the town every now and then.
Posted by WickedHamster at Sunday, July 20, 2008 4 comments: 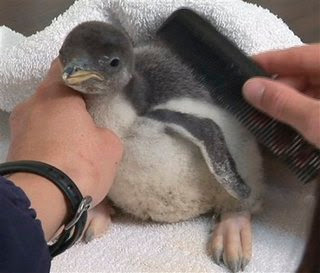 If you think getting the kids up and ready in the morning is tough at your house, you should see what we have to do around here!
Posted by WickedHamster at Tuesday, July 15, 2008 3 comments:

Not to be outdone, and inspired by the penguins' unremitting efforts, the cows are now conducting dangerously imprudent experiments with dirigibles. Look out belooooooow!!! 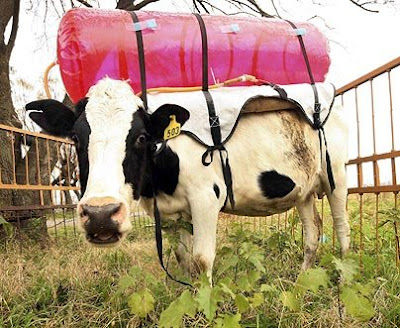 Another day at work. Pontificates can get a little boring at times. (And no comments about my hat!)
Posted by WickedHamster at Thursday, July 03, 2008 7 comments: Another day at work. Sabbaticals can get a little boring at times...
Posted by WickedHamster at Tuesday, July 01, 2008 3 comments: