The Road to Conquest - Part 3

The Fruits of Victory 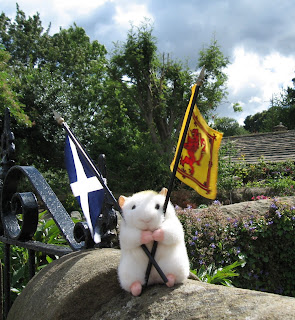 Here I am holding captured enemy standards after our illustrious triumph on the battlefield. Note I possess the royal banner of the Scottish king, personally taken from him in daring-do, mano-a-mano, and all that.

For me, the funnest part of conquest is, of course, the plunder. All sorts of goodies I get to have - cheap! The King of Scotland, poor chap, had all sorts of neat stuff, all of which now is mine all mine: 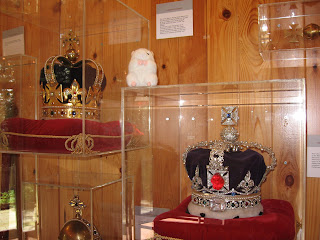 First and foremost, of course, were the pretty baubles. I just love pretty baubles! Here I'm overseeing the crating up of the Scottish crown jewels before they're schlepped off to the HamsterPalace. 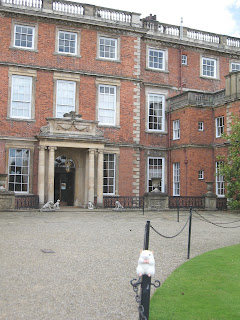 Speaking of palaces, here I am in front of my latest acquisition, thanks to the King of Scotland - tee hee hee! 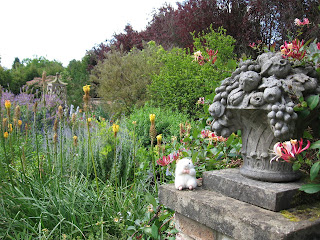 The place has nice gardens too! For Kel's delectation, I'll devote an entire post to the lovely new plantings I inherited. Ooooo! Picnics! 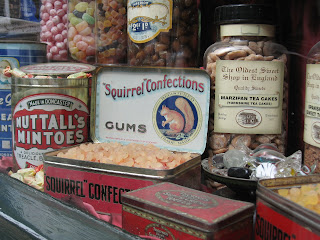 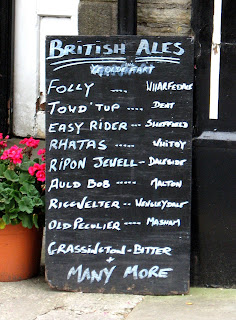 Of course, like any conscientious tyrant, I make sure I share the booty with my loyal troops! 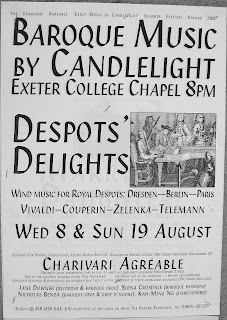 As I went by in my triumphant progress back south after the conquest, the good people of Oxford gave a gala concert in my honor. 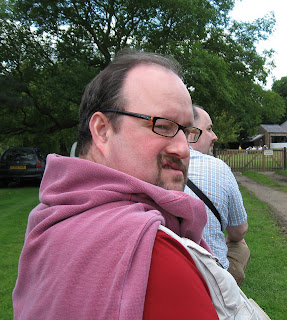 Of course, the bloated and corrupt Scottish aristocracy was still far from pleased at the turn of events... 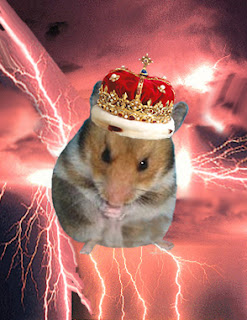 We interrupt this victory for an important message!

As many of you already know, Our Beloved & Right-Trusty Mr. Squirrel (http://hopfodder.blogspot.com/), Supreme Arch-Prefect for Brewing Affairs & Inspector-in-Chief of Ales, Arch-Provost of Spirits, First Secretary and Deputy General to the Minister of Automotive Affairs, and Chair of the Imperial Hamster Nut Conservation Directorate, and his Lovely and Beauteous wife, The Squirrelina, are expecting. 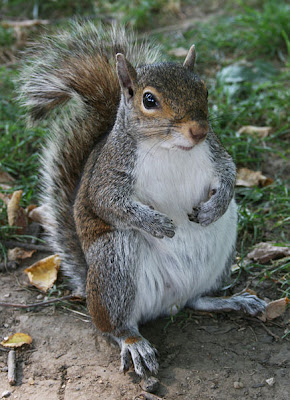 We rejoice at this splendid news, especially after the heroic service done by Our Squirrel in leading our distillery commando brigades in the recent conquest of Scotland. We were, of course, a little concerned when he went MIA for a couple weeks right after he assaulted his first target, so it's good to know he came out of battle in fine fettle! (Bet you didn't know squirrels had fettles!) 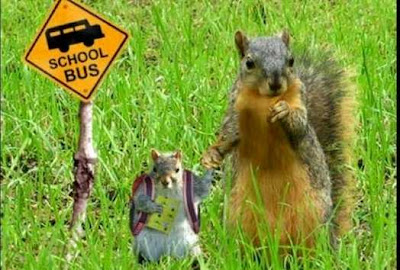 The Road to Conquest - Part 2

Once preparations had been made and all was in order for march, Our Imperial Forces headed for Scotland.

Our Good and Trusty Bert skillfully pilots the Imperial War Chariot Northward to the border, keeping constant lookout for TRACTORS and RABBITS. The Goodly and Loyal Someone rides shotgun, carefully planning the requisite tea stops along the route of march. 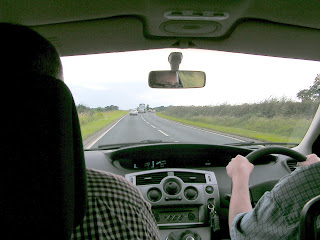 Here I personally lead the troops across the border. Showing Ourselves to Our legions and bearing in person the Imperial Hamster Battle Guidon inspired the troops to acts of the greatest daring. 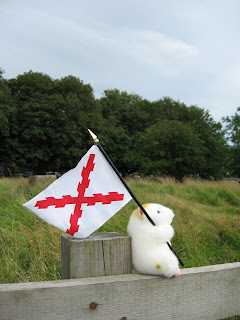 The common inhabitants welcomed us enthusiastically as liberators. . . 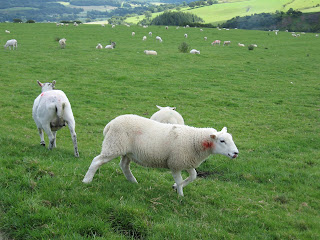 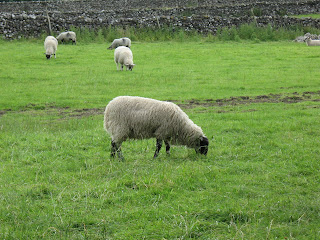 Whilst Our shock and awe filled the bloated and corrupt ruling classes with terror and dread. 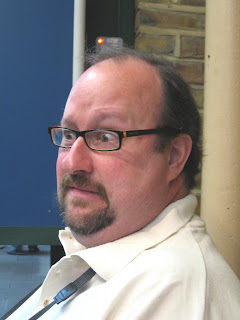 Oh yes, and there was inevitably some slight damage to infrastructure. 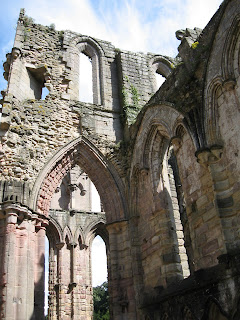 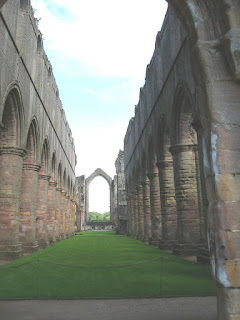 The Road to Conquest - Part 1

As some may have seen elsewhere, here I am in front of my advance command HQ at Pateley Bridge in Yorkshire. In addition to its strategic location, the town boasts a bakery with excellent custard tarts and the best espresso machine in all England. 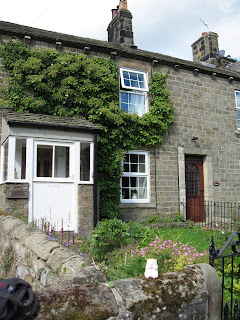 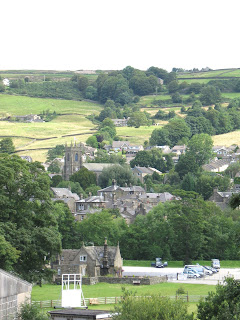 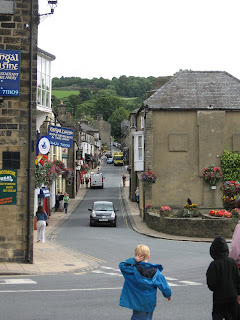 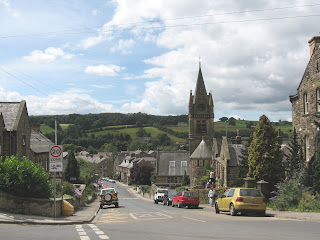 It was also necessary to secure local provisioning. Nothing but the best for The Hamster's Invincible Warriors! As Napoleon said, "An army travels on its stomach," and luscious, authentic Wensleydale cheese hits just the right spot for the hungry legionnaire! 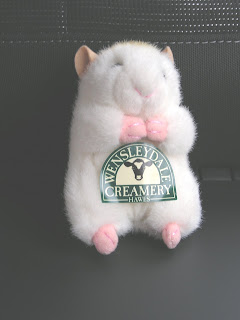 Of course, there were numerous other necessities that had to be attended to, such as inspecting the troop trains. We gave that job to DG. 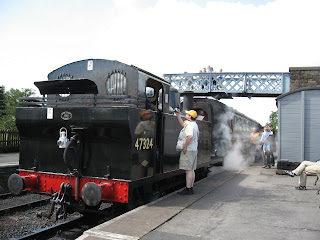 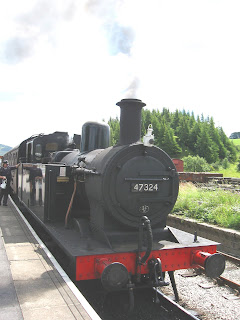 Since he is a native Yorkshireman, We appointed our right trusty Bert as majordomo, in charge of the logistics of the Imperial Hamster Court whilst on maneuvers. The fiendish Scots, as it turns out, sent out their feared commando battalions of RABBITS mounted on TRACTORS to attempt to ambush the Imperial Progress and impede our march northward. Our good Bert deftly managed to fend off the attack by the dreaded RABBITS and TRACTORS and saved Our Rodentine Person from the greatest peril!

In recognition of such faithful and selfless service,
WE hereby deign and create
Our Right Trusty & Most Loyal Minion
MR. BERT
Imperial Hamster Minister of Education
&
First Overseer of Schools
and bestow upon him the added title and dignity of
Marquess of Harrogate
Viscount of Giggleswich
Baron of Hawes

--by decree of The Hamster
Posted by WickedHamster at Sunday, August 19, 2007 7 comments: 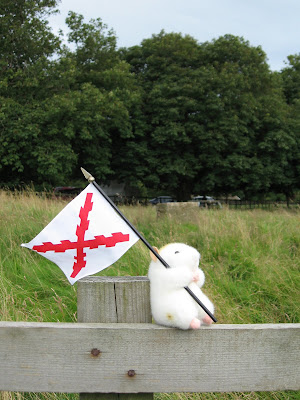 Here's a nice shot of me heroically leading my all-glorious legions over the border into Scotland. They never knew what hit 'em! Total victory was swift and overwhelming! I am, unfortunately, consumed right now with catching up on governmental tasks which awaited my return. Even the best regency councils cannot keep up with the workload of an all-conquering global despot. And there's the matter of setting the TV license fee for Scotland. Tricky since they're on HD; have to charge them more, ya know. Details of the conquest will follow in a few days. Meanwhile, break out the champagne and ale! New territory has been annexed to our realms and your beloved despot has returned!
Posted by WickedHamster at Wednesday, August 15, 2007 4 comments: