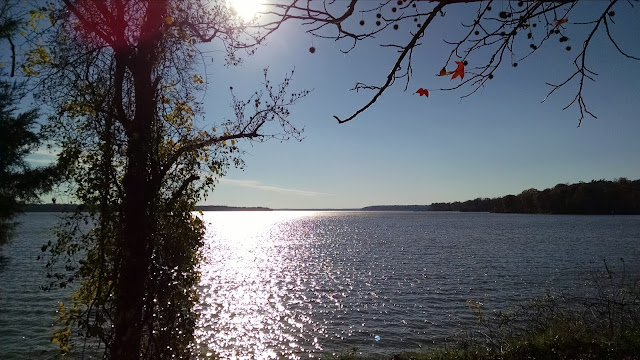 I've always loved water.  Even as a kid I was a big water drinker, and though it took a while for me to learn to swim (and I'm still not very good at it) I love to be in water.  I love to see water; I love the sound of water; I love to be near water. Water relaxes me, soothes me.  Yesterday, I wanted to get outside and clear my head.  It was a blustery day (I love wind too) and knew I needed to go down to the river.  It's wonderful we live only a couple of minutes' drive from the George Washington Parkway and Mount Vernon Trail - a National Park that runs down the Va side of the Potomac. 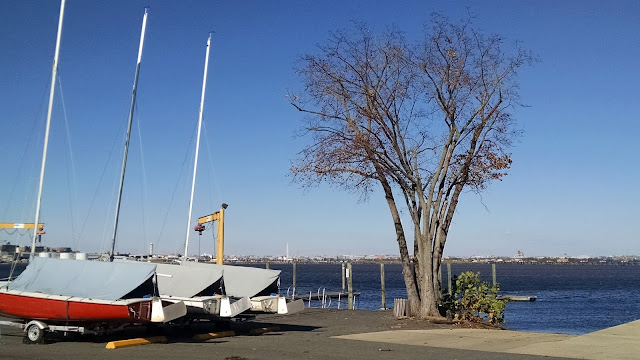 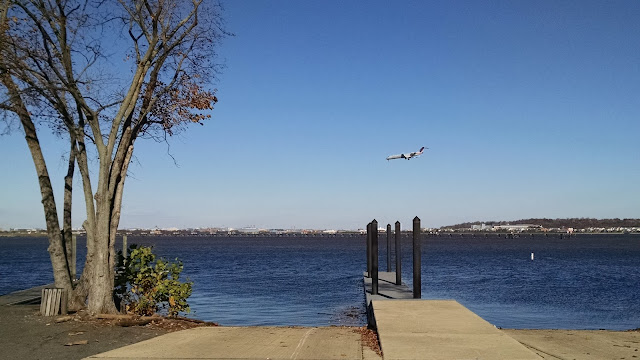 Great Father Potomac, as I like to call him, seldom lets me down.  It's an extraordinary body of water; a very different river at the falls up from Georgetown, in the gorge running past the city, at the wide expanse just past DC, to the natural and majestic flow down at Mount Vernon.

The wind was kicking up the waves and bouncing the docks up and down, the wind in the cables of the beached sailboats made a weird and beautiful sound, a brave soul donned a wetsuit and set out windsurfing. 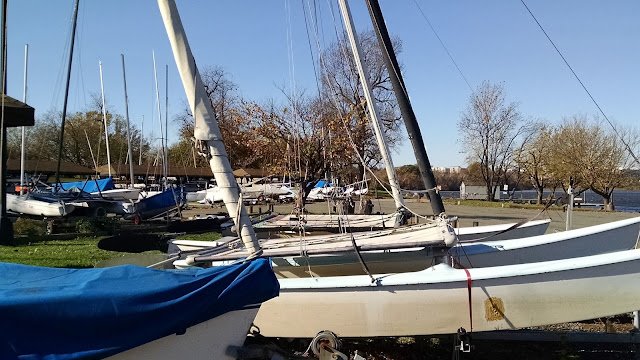 There's a wonderful tranquility in watching the water, enrapturing, transporting, whether it be rough or calm.  I can lose myself in the vision of the expanse.  It was a wonderful day to be along the Potomac.  It has become my river. 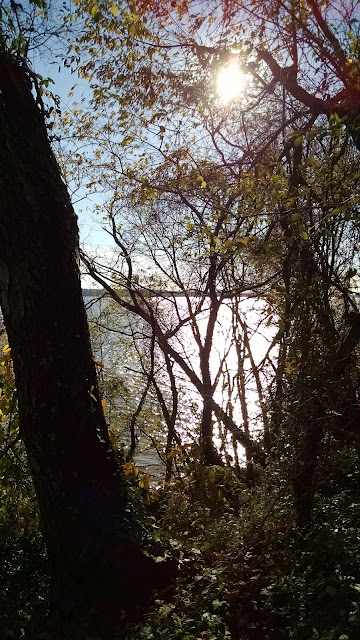 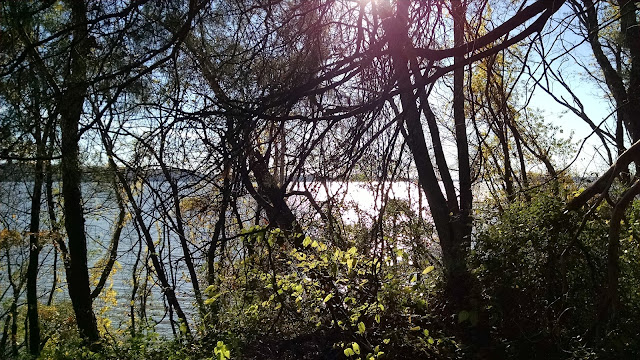 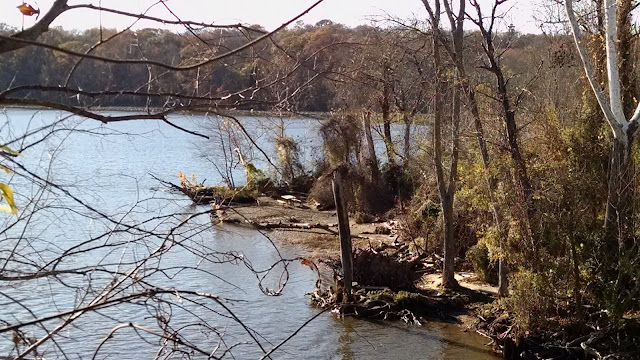 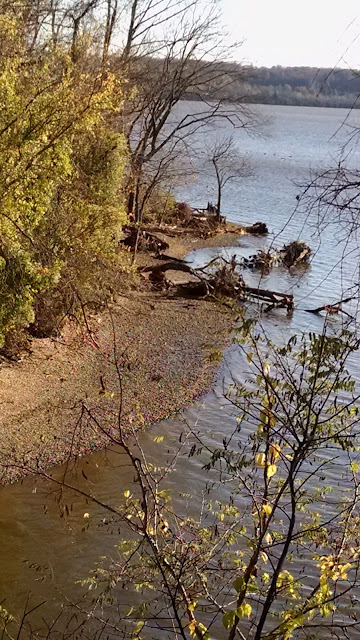 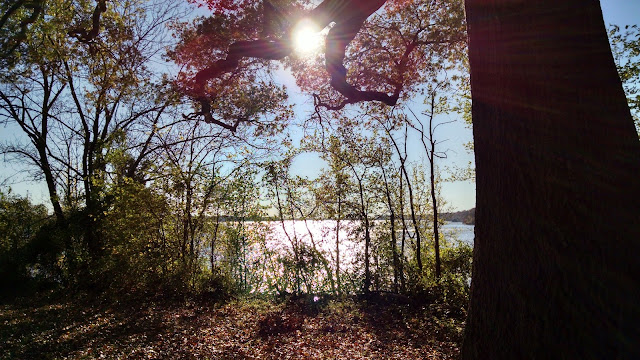 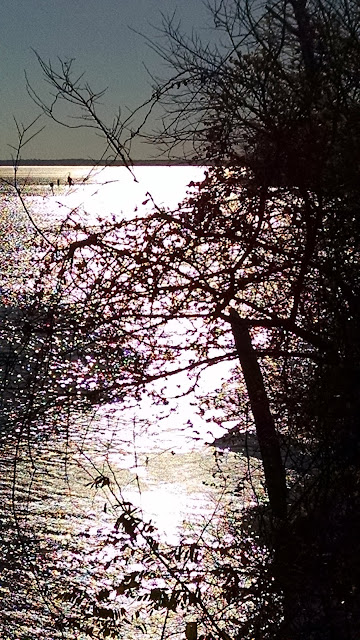 Been a low-key day.  I got up and going rather promptly, because I was feeling pressured to get going on hammering my next article into shape to submit to a journal - part of my "official" sabbatical work.  Took a lot less time than I expected.  It was in quite good shape as it was.  Need to write an abstract and then off it goes.  Just one more little, itty-bitty one, and I've accomplished what I wanted for the sabbatical.

It's getting chillier out, which I like.  I love the new car.  Things are going well, yet...  As the time approaches to return to Lexington, I am starting to fill with trepidation and loathing.  I've never enjoyed living here in DC as much as I have this stay.  Maybe that's because with the sabbatical, it was twice as long a stay as usual.  Then also, we got married, we got the living room nicely spruced up, got a wonderful vacation in.  So Kentucky is an exercise in "how ya gonna keep 'em down on the farm?" - except I've been wanting off the farm for years now.  These days, my job brings a lot of sadness and frustration and anger (can you tell I'm in education?)  I don't like feeling bad, and I especially don't like dealing with stupid, short-sighted people, and I hate to disappoint you but the education profession of teeming with that sort.  So part of me is not looking forward to the potential negative feelings that come with being back at the university.  I don't have all that long till retirement, but at this point that cannot come too fast.

So I'm mostly happy with just a bit of unhappiness around the edges.  Whether that's being mostly sunny or partly cloudy in emotional terms, I don't know.
Posted by WickedHamster at Monday, November 09, 2015 3 comments:

Well... today I turned 61.  It was a nice, quiet day with my Poopsie; I took a nap for an hour.  Age is a funny thing.  I didn't want anyone to notice my 50th birthday; I was thinking of having a major party for my 60th. (I ended up not doing so because I was just too tired from things at school that year and just wanted to be quiet and away from as many people as possible.)  One reason, admittedly vain, for not minding being in my 60's is that many people put me in my 40's.  But that aside, my 60's have brought me a new sense of self and self-contentment.  I realized just this past year that I've pretty much proven to myself all the things I wanted to prove to myself.  And I care less and less and less about whether I prove myself to anyone else.  I find that I actually don;t care what people, except for the people I love and care about think of me.  It's really rather liberating.  This also produces some less than pleasant side effects: having an even lower opinion of humanity in general, being really bored with my job, for example (more on those topics, undoubtedly, in future posts) - but other than that, I find myself genuinely content with myself.  That is very uncharacteristic of me historically.  Most of my life I've been dissatisfied with myself in some way(s); I think I've really gotten over that.  I think I'm also coming to realize that there has been a certain instinct in me that has, at least for the past couple of decades, ultimately led me to where I am now, or at least it begins to seem so looking back.  While consciously I was often consumed by certain ambitions, for example, there was something in me that seemed to restrain myself and keep my fro the unhappiness they would likely produce.  I'll have to think about that some more.  I think I might be on the verge of experiencing serenity.  Gee... wouldn't that be something...
Posted by WickedHamster at Saturday, November 07, 2015 2 comments:

So how does it feel?

OK folks, this is with any luck my return to somewhat regular blogging. Here goes...

After the wedding, a few people asked the question "How does it feel to be married?"  Frankly, I didn't expect to notice any difference.  After all, David and I have been together for 23 years now; so what difference would the license and ceremony make?  Much to my surprise, it did make quite a difference.  For the next several days after the wedding, I felt a giddy happiness almost non-stop.  It wasn't coming from anything in particular; it was just there, steadily and constantly and for days running.  I was also smiling a lot for no apparent reason (other than being married). Generally speaking, though a charming and witty fellow, I'm generally not known for such quiet delirium.  (Earlier in the year, a friend pulled me aside at the office and asked if I was OK, since I had displayed my usual misanthropy for a couple of weeks.  BTW, that was due to my sabbatical coming on.)

So, what can I say about all this? Dear Dr. Spo might have something psychiatric to say, and I perhaps could utter the adage that I was "surprised by joy."  But rather than analyze or sermonize, I think I'll just - uncharacteristically - accept that for whatever reason, marrying David has made my surprisingly, unexpectedly, and exceedingly happy.  And yes, for me, being married did something to my innards that was delightful and welcome.

Never underestimate the power of ritual and pieces of paper from the government.
Posted by WickedHamster at Wednesday, November 04, 2015 3 comments: