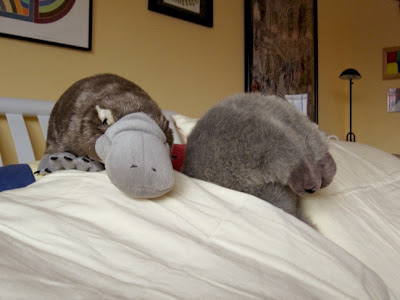 Sorry it's been a while, but it took longer than expected to learn to handle the camera with webbed feet. Now that I've got the hang of it, I was going to introduce, as promised, my fellow-countryman, Rodney the Wombat. I mentioned he was shy... 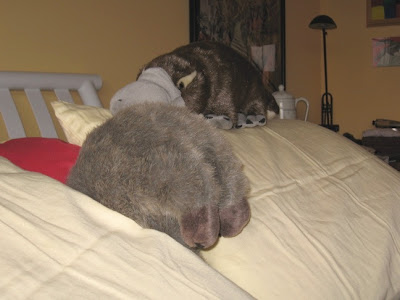 but neglected to mention how expert wombats are at burrowing. 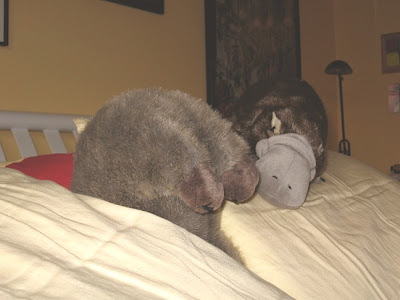 Try as I might, I couldn't persuade him to show his cute, little face to the camera. Well, I'll keep talking to him. In the meantime, I will endeavor to entertain you by introducing you to other friends and housemates in future posts.

Wishing you well! -- Lanfranc the Platypus

Wherein we meet our friend... the platypus. 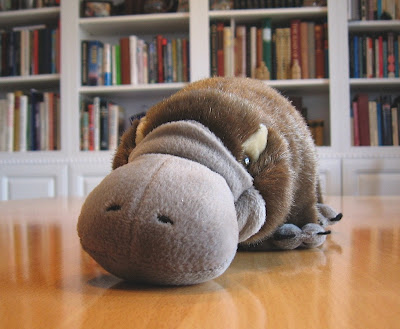 Our Dread and Sovereign Lord, The Hamster, has been quite busy of late in his alter-ego as a mild-mannered Classics professor at a major state university. So he asked me to fill in and entertain y'all for a while.

As some of you likely know, the fetching residence of WH and DG is populated by more than just a flock of some 90 penguins. (There sure are a lot of 'em!) Other creatures of wit, talent, and distinction also live here. There is a small flock of sheep, a dodo (from England), about 6 puffins (which being cliff-dwelling birds, roost atop a tall bookcase), a wombat, and few other odds and ends here and there.

How, may you ask, did we all end up here? Well, as you know DG and WH (and TR of course) do a fair amount of travelling to interesting places. Because they are persons of quality, they often hang out where creatures of quality such as ourselves may be found. I was "discovered" working at a souvenir shop in Washington, D.C. - Natural History Museum to be exact. I wanted more excitement than I could get in my little burrow by the stream "Down Under," and I figured America's capital was where the action was. Turned out getting a job wasn't easy. Had trouble working for the feds since I was still an Australian citizen. D.C. was fun, but it can get pricey, and souvenir shop wages don't amount to much -- especially if you're the merchandise.

So when WH and DG came by and saw me, and commented to one another that I looked like "their kind of critter," and that they were in the market for a companion for their wombat, who was getting a little homesick, I immediately took them up on their offer to whisk me away to a life of ease and luxury (with an enormous number of penguins).

So here I am, and that's also how most of the rest of us got here. I'll have to introduce you to Rodney, the wombat, sometime soon. He's a little camera shy. Until next time, all the best!

-- Lanfranc the Platypus
Posted by WickedHamster at Friday, January 19, 2007 7 comments:

Commendation & Selections from Our Cellars

First, let me recognize the excellent work being done by good Mr. Squirrel, Supreme Arch-Prefect for Brewing Affairs & Inspector-in-Chief of Ales, most especially in showing initiative in recently extending his purview into rare whiskeys.

Whereas,
Our Good & Right Trusty MR. SQUIRREL
displayed most loyal and meritorious service to us,
we hereby create and proclaim him
ARCH-PROVOST OF SPIRITS,
with all the rights and responsibilities attached thereunto.

-- by Decree of The Hamster

In the spirit of this august and auspicious occasion, I thought I might share some items DG has recently drawn from our cellars. (He's the drinker in the family; although Edmund the Dodo and Lanfranc the Platypus do imbibe from time to time -- but I digress.)

To continue where Mr. Squirrel left off... "Isle of Jura" single-malt scotch whiskey. Distilled since 1810 from pure spring water on the island of Jura, and the sole distillery on the island. 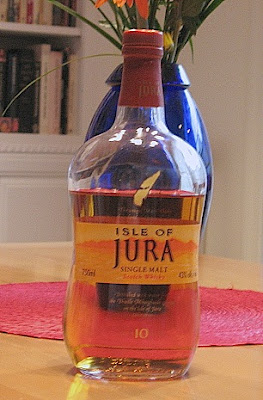 Staying in Britain and not far from the Scottish border, we present an offering from Nick Stafford's Hambletom Ales from north Yorkshire. "Toleration" is brewed from sugar, without any barley, rye, or wheat malt; it is rich in the flavor of cascade, liberty, and challenger hops. (Sounds like something Squirrel would like.) 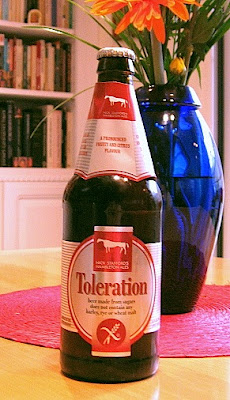 Also in the Bourbon realm is the unique "Prichard's Double Barrelled." This bourbon is aged, blended, and then barrelled and aged again after blending to deliver an especially smooth taste. Paradoxically, this bourbon is produced in Tennessee -- if the governor of Kentucky sees this post, he'll likely revoke my driver's license. 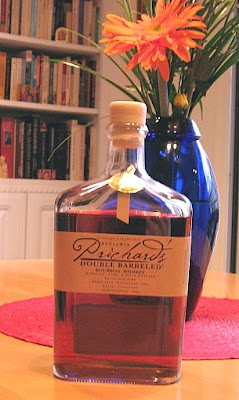 FLEE TO THE HILLS!!!

The end of the world is at hand. Florida beat UCLA in basketball and Ohio State in football... in the same year. The end is nigh! Doom! Ruination! The end of all we hold dear!!!

(Brits are exempted from comprehending the impact of this. No problem! I can't figure out what The Ashes is/are for the life of me.)
Posted by WickedHamster at Tuesday, January 09, 2007 5 comments:

Now that we are a bit removed from Christmas and there has been some calming of nerves, I thought I might mention our own experience with unfortunate comments by grandmothers. (See Kel's blog: http://monkeydragon42.blogspot.com/ for gory details.) A few years ago, we were at the San Diego Zoo and had the great good fortune of adopting a baby California Condor, whom we named Fluffy. 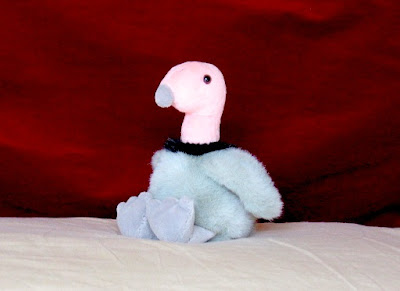 I just love Fluffy and think he's just the cutest thing. Well, one day, DG's parents stopped by on their way north for the summer, and Fluffy was playing in the living room. DG's mother walked in and said: "Where did you get that homely thing from!" You can imagine how difficult it was to comfort poor little Fluffy. He was sensitive anyway, being endangered and all, and now grandma calls him homely. Of course, being young, Fluffy wanted to make it OK with grandma and kept on asking to go down with us when we'd go to Florida. Oh what to do? He started as a defense mechanism to lord it over the other birds because he was endangered and, therefore, "special." Penguins, as you may know. have very healthy egos, and there were a lot of complaints. (Oh the squawking!) At the same time, he started thinking that grandma would like him better if he weren't a condor. I knew this went too far when he asked to take swimming lessons. Too much time around penguins.

Happily, I was able to find a tutor for Fluffy, and he's now becoming much better adjusted. 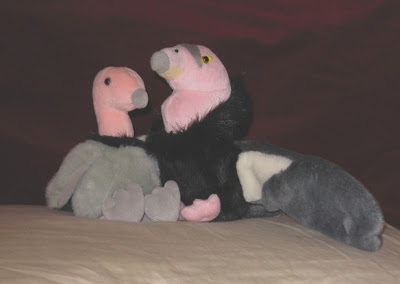 He so admires his tutor, in fact, that he now wants to grow up to be an educator himself. His dream is to open a College of General Buzzardry at the world renowned Bob's University of Advanced Penguinity and Comparative Avian Studies. 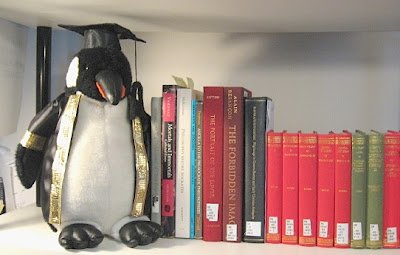