We're going all light-hearted (that should be hyphenated, right?) and frothy today.  Sometimes I am asked if I have any hobbies.  My usual response is that I don't have hobbies, I have serial obsessions, i.e., I take a fancy to something and do it to furious excess and then drop it and move onto something else.  (I would ask those of you who will be tempted to make a wise crack at this point to kindly refrain--you know who you are.)  I'll collect a certain type of toy car and try to get all of them in a series, same with die-cast aircraft and so many other things.  Good news is such things are usually small and easily stored (just like my men).  I learned one way of curbing this habit it to collect things the entire set of which amounts to a small number, e.g., replicas of medieval bishop chess pieces, of which there are only three as near as I can tell: 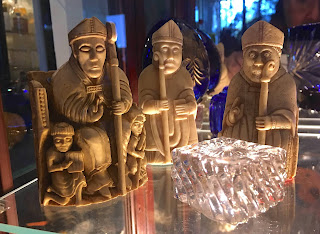 or versions of the USS Enterprise (yes, I know there's one ship in the photo of a different class and Enterprise E is not pictured): 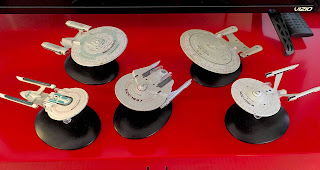 Then there are the royal ducks, which I first encountered at service stops on the Autobahn:

l to r: Mozart, Washington, Louis XVI, Ghost of Christmas Past (whom I've renamed The Great & Powerful Duck Goddess), Marie Antoinette, Ben Franklin, Elizabeth II, Emperor Franz Josef.  I also encountered a (Mad) King Ludwig II which I sent to the much-beloved Spo.
Of particular note are a series of figures which I've come to call a set of role models from various times in my life:

l to r: a good, kind, & magical fairy; Daffy Duck; Cardinal Richelieu; St. Michael the Archangel; St. Benedict; Louis XIV.
Make of all this what you will.
Posted by WickedHamster at Friday, June 12, 2020