I'm getting serious again.  For a good chunk of my life, I suffered with depression.  I think it may have started when I was very young; I don't quite know since I feel it took me quite a while to become self aware.  It certainly was well established in my teens, likely as a result of puberty, that fiendish bringer of pain and delight.  Since that was also the time I realized I was gay, the two were undoubted connected.  My depression took several forms, from moroseness, to periods of unexplained sadness, to feeling I was never going to be happy.  But the most curious and persistent experience is hard to describe; the best I can do is say I felt as if there was a glass wall between me and the rest of the world.  I could see what was going on around me, participate in it, but I most often felt that I wasn't really there, that there was a barrier weirdly separating me from other people and my environment.  Sometimes that made me incredibly thoughtless, at other times downright mean.  Coming out did me a lot of good.  Counseling helped with some things, but it never really got to the core problem.  Finally, I think it was in my mid-40's, when I mentioned this to my physician, a tremendously skilled internist.  I think I never mentioned this to a doctor before because I saw it as a psychological problem, not a medical one.  I'm not sure, but I believe the impetus may have been the time AH came home from work to find me sobbing uncontrollably in the living room because we were out a mayonnaise.  (Running out of mayonnaise has been a running gag with us ever since.)  Anywho, my wonderful doctor suggested that my depression might be "clinical," i.e., physiological (I don't know if they still make the distinction between situational and clinical depression.)  She suggested trying medication and - poof! - for the first time in my life the glass wall went away.  It was little short of miraculous.  So the darkness went away and I've had the normal ups and downs of life ever since - though perhaps I feel both the ups and the downs a bit more intensely than other folk.
So why am I saying all this?  Can't say as I know exactly, but it just struck me as something I should say.  I've never quite laid this all out publicly before and I guess I felt that I should.  Maybe it will prove helpful to somebody.  The older I get, the easier self-revelation becomes. 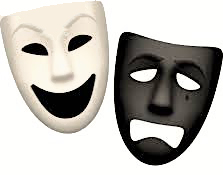