Persons of delicate dispositions and those
who object to the eating of animals in general or
of reptiles in particular should not read this posting. 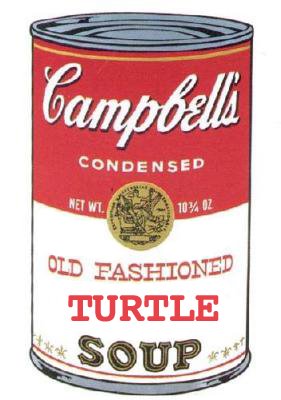 Last weekend, DG, TR and I went up to, believe it or not, AKRON* (how the heck did Sq know that?!?!?!) to a cousin's place for my extended family's annual turtle soup picnic. Now, I happen to come from a long and illustrious line of great white turtle hunters. No doubt this almost lost art strikes some as peculiar (especially with all the farm-raised turtles on the market these days) but my family takes it rather seriously -- or as seriously as my family takes anything. This event has been going on now for some 60 years or more and has now been taken over by my generation, as there are only three aunts and uncles left, and all of them are well into their 80's. Indeed, my next oldest brother has recently been bitten by the turtle-hunting bug -- and he just turned 60.
Of course, the reason why one could undertake this sport late in life, and the attraction of it to my uncles, etc. in the first place, is the nature of the hunt itself. If you think we're going to be thrashing around in Canadian swamps wrestling large-shelled reptiles, spouting fake Australian accents, and yelling "Crikey!" you've got another thing coming. Your average turtle expedition runs as follows.

Take large cooler of beer and get into boat. Go off to shallow part of lake; drink beer. Bait hooked line; drink beer. String line into water; drink beer (at this point, on an exceptionally cold day, a bourbon or Canadian chaser may be added to ward off the flu). Finish beer. Return to dock.

On the following day, take large cooler of beer and get into boat. Go off to shallow part of lake; drink beer. Pull up line and examine for turtles. Remove any caught. Celebrate catch with beer and , if the catch has been exceptionally good, a bourbon or Canadian chaser may be added to ward off the flu. Finish beer. Return to dock.

An alternative hunting method is to walk along the road and if one sees a turtle, stand on the turtle to prevent its escape and yell loudly, "Hey, I got one on the road; come help me!" Family members will then come rushing from the nearby cabin with a net, a cooler of beer, and, if it's a large turtle, a bottle of either bourbon or Canadian to ward off the flu.

This year was an exceptional picnic. Uncle Johnnie, the master soup-maker of the previous generation squared off against my cousin, who had his own recipe, and we had competing pots of soup. My brother actually provided Uncle Johnnie's turtle, which he discovered in a pond a short distance from his house. Being an avid sportsman, my brother always carries a net in his car and a cooler of beer. He seldom gets the flu and so doesn't bother with the whiskey. Since this is a public blog, I won't say whose soup l preferred. A great time was had by all, except for those, of course, who drank too much of Uncle Johnnie's home-made wine (see DG's comment on previous post; I warned him, I really did).

Photos from the event will be appearing on Travel Penguin shortly.


* For readers from northeastern Ohio, it is incumbent upon me to point out that my family and I are NOT from Akron. We are proper people from Cleveland. However, in recent years and thanks to urban sprawl, some members of the family have moved down into Summit County. Of course, for those of us who remember Akron as "the largest city in West Virginia," this move was at first somewhat distressing. With the influx of people from Cuyahoga County (and Asian businessmen there to buy up and manage what's left of the rubber and tire industry), the Akron area has become far more civilized and refined, and we have largely succeeded in smothering the indigenous culture so that one now barely knows notices any difference between the two regions.
Posted by WickedHamster at Tuesday, October 17, 2006